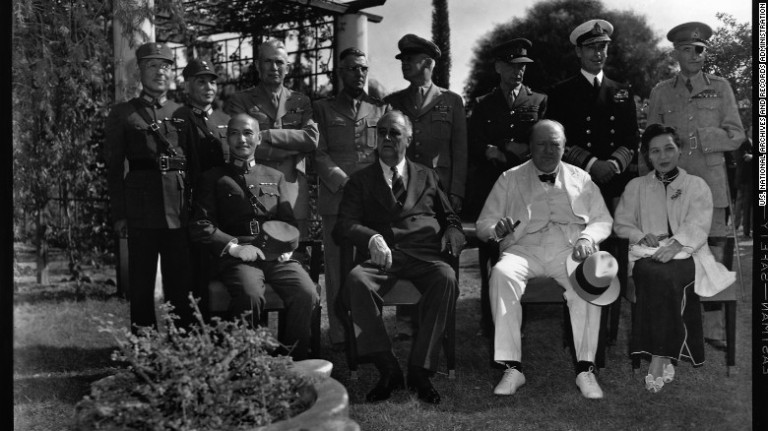 Chinese President Xi Jinping is determined that Thursday’s massive military parade — the first since he came to power in 2012 — will proceed without a hitch.

Hundreds of factories have been shut to ensure that when the 12,000 troops, 200 fighter jets and 500 pieces of military hardware make their way through the ancient heart of the Chinese capital they will do so under crystal blue skies.

Flights in and out of Beijing will be canceled for the parade’s duration and, just to ensure that the city’s air space is safe, monkeys, falcons and dogs have been deployed to scare away birds.

And while Chinese will enjoy a three-day public holiday as part of the celebrations to mark the 70th anniversary of the end of World War II, good luck to anyone wanting to tune out the pomp and pageantry.

Broadcasters are prohibited from airing any entertainment programs, half of Beijing’s five million registered cars are banned from streets and many of the city’s parks and tourist attractions are shuttered.

Those living within the lockdown area will be virtual prisoners: They aren’t allowed to leave their homes, invite guests, use balconies or even open windows.

The last was for the 60th anniversary of the founding of the People’s Republic of China in 2009 under the watch of former President Hu Jintao.

For Xi, the stakes are high. The victory parade allows him to project his power, both domestically, and in a region where many countries are wary of China’s ambitions, says Tate Nurkin, a defense and aerospace analyst at research firm IHS.

U.S. allies in Asia, like Japan and Taiwan, will be paying close attention to the military hardware on display, particularly ballistic missile technology. In Washington, military watchers will be given a rare chance to check out China’s home-grown defense industry and how it may go about pursuing territorial claims in the South China Sea.

At home, the parade allows Xi to distract from turmoil in the financial markets and a massive industrial explosion in Tianjin that killed more than 150 people. In the background are rising social tensions and ethnic unrest in parts of the country, as economic growth slows and the income gap widens.

But more than anything, the parade is Xi’s show of force.

Three years into his expected decade-long rule, Xi is considered the most powerful Chinese leader in decades thanks largely to an unprecedented anti-corruption campaign.

This may go some way to explain the government’s nothing-must-go-wrong approach in its preparations for the military extravaganza.

Who’s going?
For a celebration of the “world’s anti-fascist victory,” leaders from China’s former wartime Allies are conspicuously absent.

The 30 VIP guests include mostly heads of state or government from Asia and Africa.

The most prominent name is Russian President Vladimir Putin, who has been increasingly leaning east politically and economically after being shunned in the West due to his stance on the Ukraine conflict.

President Park Geun-hye of South Korea, a major U.S. ally in Asia, is also attending. Seoul has been growing closer to Beijing under Park thanks to flourishing economic ties and shared concern over a volatile North Korea.

The United States and United Kingdom, China’s most important allies during Word War II and two countries President Xi Jinping will soon visit, are not sending their top leaders — though former British Prime Minister Tony Blair is expected to attend.

United Nations Secretary-General Ban Ki Moon will also be there.

Japan’s role
But one leader whose absence was never in doubt is Japanese Prime Minister Shinzo Abe.

The Japanese leader’s failure to offer a new apology for Japan’s brutal invasion and occupation of much of China in the 1930s and 1940s has prompted new denouncements from Beijing.

The state-run Xinhua news agency demanded the Japanese emperor, a revered figurehead, to apologize for his nation’s wartime atrocities, triggering protests from Japanese officials — though 81-year-old Emperor Akihito recently expressed his “utmost grief” for the suffering Japan inflicted in the war.

While China has said that the victory parade doesn’t target Japan, it’s clear that anti-Japanese sentiment underpins the celebrations.

A dozen Chinese TV dramas about the war against Japan were filmed during the summer and shows on this theme will be shown this week despite the nationwide ban on entertainment programming.

And in Shanghai, an ice cream chain is giving away popsicles that resemble Hideki Tojo, Japan’s wartime Prime Minister who was hanged as a convicted war criminal.

Lingering questions
One Chinese movie slated to premiere on the parade day is “Cairo Declaration,” a drama depicting the 1943 gathering of leaders of the United States, United Kingdom and China in the Egyptian capital to set goals for the post-war order.

A promotional poster for the movie features Chairman Mao, prompting much attention and derision online.

Mao, the founding father of Communist China, was then considered a rebel leader and nowhere near Cairo.

Generalissimo Chiang Kai-shek, leader of the ruling Nationalists, who co-operated with the U.S. army during the war, represented China at the summit.

The episode highlights lingering questions about the wartime role of the Communists, who have ruled mainland China since 1949 after beating the Nationalists in a bloody civil war.

The two forces had formed an uneasy united front against Japan during the war.

Chiang and his forces fled to Taiwan and, even today, the self-ruled island — which Beijing regards as a renegade province — still retains the formal name of the Republic of China.

In Mao’s China, the Communist Party had little interest in providing any space for positive reflections on the wartime contributions of their Nationalist enemies, says Rana Mitter, a historian at Oxford University.

But, as it searches for a new source of nationalism, China has reassessed, he says. And both Communist and Nationalist veterans will be honored during this year’s ceremonies.